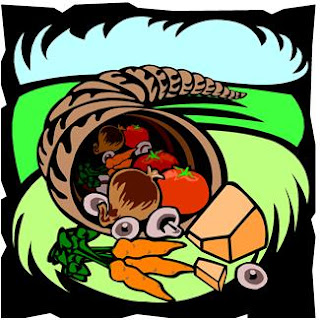 As a reminder, the library will be closed on Thursday in observance of Thanksgiving. We will open Friday at our usual time. Also, there is no story time on Wednesday. We will see you again next Wed (1 Dec) at 1000 in the children's library.

Ok, Now that we have the book keeping out of the way, lets talk about our favorite harvest festival, here in the United States. What is it? Where did it come from? What's up with all the football?

While it's since moved away from religious roots, Thanksgiving is still a day to give thanks for a bountiful harvest, and for that which we have--friends, family and material comforts alike. Harvest celebrations are a long tradition of many cultures, including European and Native American, including sharing food and company, so the first Thanksgiving, whenever it was, was not a far stretch for either culture. 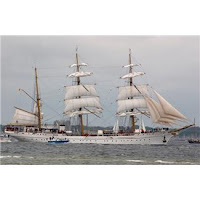 Some say it started in 1621 at the Plymouth Plantation, but it may have started even earlier in Canada or Florida. It's still celebrated in Canada (October) and Florida (same day as the rest of the country, silly!) to this day. It's also celebrated in Leidenk in the Netherlands, and there is another similar holiday on the same day celebrated on the island of Grenada in the Caribbean Sea. Thanksgiving gets around a bit!


The date's floated around a bit, too. We're used to it being the fourth Thursday of November, but it wasn't actually fixed there until 1941. "The First National Proclamation of Thanksgiving" was given by the Continental Congress in 1777. December 18th (a Thursday) was actually the date set aside for a day of "solemn thanksgiving and praise. Later, in 1789, George Washington declared Thursday, November 26th, to be the first "Thanksgiving Day." Lincoln later declared that Thanksgiving Day should be the last Thursday in November--which is, consequently, different than the fourth Thursday, especially in months with five Thursdays.

And it was only moved back (theoretically by a week) by FDR in 1941 to expand the shopping season by a week, since back then, it was considered bad form to start advertising for Christmas before Thanksgiving. Aren't you glad we don't have that problem now days?

Sure, we have our fall harvest foods, like squash and apples and potatoes and corn and turkey, all great traditions on Thanksgiving day. But we've also picked up a few other traditions, such as the Macy's Thanksgiving Day Parade, which has been running since 1924. Football has also been a mainstay on Thanksgiving since 1902, from professional football, with the Detroit Lions hosting a match every  year since 1934, to college (who isn't going to be watching the Border Showdown between the Jayhawks and Tigers, come on--be honest!) and high school football. The roar of the crowed and the exclamations of the color commentators have been just as much of a part of our Thanksgiving tradition as pumpkin pie and mashed potatoes for as long as many of us can remember. 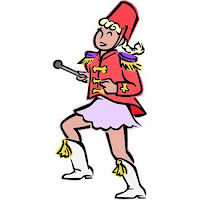 So when you're trying to figure out if the turkey really is done, or are watching Detroit play, yet again, or if you're setting up your holiday decorations early, or spending time with friends and family, volunteering, or are at religious services, just remember that you're part of the big long history of Thanksgiving. Have a safe and happy holiday.

Posted by CARL Staff at 5:49 AM No comments: Links to this post

That's right, no story time this Wednesday (24 Nov)! But we will see you back in the second floor children's library on December 1st at 1000.

Also, the CARL will be closed on Thursday, 24 Nov in observance of Thanksgiving. We will open at our regular time on Friday the 25th.

We hope you and your family  have a safe and happy Thanksgiving!

As a consolation prize, we present this coloring sheet from http://www.kidsdomain.com/--feel free to print it and color it in!

Posted by CARL Staff at 6:49 AM No comments: Links to this post

Friday Fun: Need something to do over Thanksgiving?

Maybe you've got a long drive ahead of you next week, or you need something to listen to while you cook, or you're looking for an alternative to endless parades and football. Fortunately, the CARL can help! Check out our NEW DVD and Audio Book purchases!

Need something "educational" for the holiday? Check out The Reduced Shakespeare Company's production of The Complete Works of William Shakespeare (Abridged).

In the course of two acts and one tactfully utilized intermission, the Reduced Shakespeare Company covers every single one of the Bard's plays and sonnets.

If you want to run a marathon to get caught up with the popular series, or just want to fast forward to all of the Quiddich matches, you can check out all of the Harry Potter movies, audio books or novels.

If you need something to listen to, but don't want to bother with the CD player or burning tracks to put on your MP3 player, check out our Playaway section. Each Playaway is an audio book on its own self-contained MP3 player. Just plug in your own ear phones, and you're ready to go. If you need your hands free for jogging or cooking or tidying up the house, just sling the included lanyard around your neck, and you're ready to go. We have fiction and non-fiction, including language courses.

Like this audio book right here--On the Wrong Track by Steve Hockensmith. The two brothers from Holmes on the Range are back, and this time they get to become real detectives, with badges and everything.

But, if you like CDs for the car or the house, we have those too!  Never had a chance to read it, but kept wanting to? Check out the audio book version of Memoirs of a Gesha, by Arthur Golden. The story of a geisha working Kyoto, Japan before and after World War II, we're taken into a world where a woman's virginity can be sold, and girls are taught how to beguile powerful men.
Posted by CARL Staff at 6:24 AM No comments: Links to this post

The U.S.-China Economic and Security Review Commission has just released their 2010 Report to Congress.

Other reports from the Commission include:

Posted by CARL Staff at 12:21 PM No comments: Links to this post

The library will be closed tomorrow in observance of Veterans Day. We will open tomorrow at our usual time.
Posted by CARL Staff at 6:05 AM No comments: Links to this post

TOMORROW (11/10) REFWORKS - Create your bibliography just by the click of a mouse. OK, so it’s not that easy, but RefWorks can make it much easier to organize your sources, cite them and create a bibliography for your thesis or other long paper. Come and learn the tricks. 1230-1330

WEDNESDAY (11/17)DIGITAL LIBRARY / RESOURCES - Learn how to search the CARL’s digital library and the treasure it contains. You can learn about Military History Institutes digital library, the Open Archives Initiative and others. Get access to primary sources from your recliner at home! 1230-1330

Bring your lunch, and yourself to room 112 E/F in the Combined Arms Research Library to learn something new to make your research life easier!
Posted by CARL Staff at 2:35 PM No comments: Links to this post

From the website summary http://www.cnas.org/node/4997  the authors [John Nagl and Travis Sharp] "argue that although policymakers have taken great strides in recent years to support the Guard and Reserves, the U.S. government still is not investing sufficiently in the policies, laws, and budgets required for the Guard and Reserves to fulfill their current and future role in U.S. national security."

A video of an interview with one of the authors, John Nagl is available at http://www.cnas.org/node/5003
Posted by CARL Staff at 8:05 AM No comments: Links to this post

The life of a baby otter can be tough at the New York Aquarium. There's playing and swimming, followed  by getting dried off and combed (with snuggles, of course). THEN they make you have your bottle and take a nap.

Tazo is the star of this video. He's an orphaned Sea Otter who was raised at the Alaska SeaLife Center, but seems to be adjusting to life in The Big Apple just fine!

Thanks to the nice folks at ZooBorns for providing a link. Their main mission is conservation, but they are quite good at bringing The Cute as well (examples: Lion Club Swim School, this adorable stripy baby Brazilian Tapir and tiger cubs playing with pumpkin "enrichment toys.")

Are all baby animals cute? Check back at ZooBorns regularly and then give us your thoughtful analysis! (Who's the cutest two-toed sloth? You are! You are!)

Posted by CARL Staff at 6:10 AM No comments: Links to this post

The Combined Arms Research Library will be closed this weekend, November 6 and 7th, for carpet cleaning. We apologize for the inconvenience.

Thank you for your patience, and we hope to see you Monday morning, bright and early, when we re-open.

If there's anything we can do for you before the closure, such as research requests, ILL requests, etc. please let us know.
Posted by CARL Staff at 11:24 AM No comments: Links to this post