Did you miss our Pirate Day?

The Fort Leavenworth Lamp has some great pictures of our little pirates. Have pictures of our pirates? Let us know! We'll post 'em here!
Posted by CARL Staff at 6:36 AM No comments: Links to this post

Banned Books Week is being celebrated by the American Library Association and many American libraries this week (Sept 26-Oct 2nd)!

It's a yearly reminder of the precious freedom we enjoy in the United States to read and write what we choose, and a reminder that even if we disagree with a book's point of view, it should still be available for others to read and make up their own minds about.


The Banned Books website lists 2009's ten most challenged books. It also lists previous years' most challenged titles and ways that you can celebrate our right to read and think freely.

Come into our library and pick up a bookmark, ask librarians about banned books, and pick one up to read this week! If you do, let us know what you read!
Posted by CARL Staff at 12:32 PM No comments: Links to this post 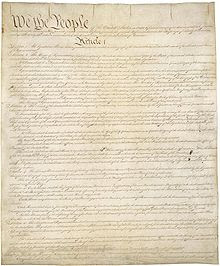 THE CONSTITUTION: The Constitution was the document that cemented America into a cohesive whole. It defined what  the framework for the organization of the US government. It created three branches of government and specifies the powers of each branch. It also reserves powers not mentioned therein to individuals and states.  Prior to this, the country was merely a loose conglomeration of states, as defined by the the Articles of Confederation (ratified in 1777).

(Also, today is CARL's celebration of Talk Like a Pirate Day! Be sure to visit us at 3pm for costumes, animals, stories, prizes, fun and CAKE! Bring a costume and bring a friend!)
Posted by CARL Staff at 9:01 AM No comments: Links to this post


A fun parody of Too Late to Apologize by Timbaland. It's the Declaration of Independence video you didn't even know you wanted!

But now that it's here, how could you ever have lived without?

Some materials CARL owns on the subject:
The Declaration of Independence
The American Revolution
Posted by CARL Staff at 6:02 AM No comments: Links to this post

Are you ready for CARLs Pirate Day??

Reminder: Tomorrow from 3-4:30 we will have stories, animals, prizes and CAKE! We'll be celebrating International Talk Like a Pirate Day, so dress up in your pirating best and join us in the fun!

And to get you ready, here's a song to make you feel like a pirate:

Posted by CARL Staff at 1:38 PM No comments: Links to this post

A great story from Rhode Island: while preparing for Hurricane Earl to make landfall, a team from the archives department came across some historic documents dating back to the founding of Providence in the basement of the town hall. Some of the documents are minutes from meetings regarding the town charter. They'll be carefully preserved and cared for so that historians will have a chance to explore the these new discoveries.

Archivists, librarians and historians attempt to make good choices on what to save and preserve all the time, and sometimes they have a little help from neglect and serendipity. What's lurking in a forgotten storage space in YOUR town hall? What treasures are in your attic?

Posted by CARL Staff at 8:34 AM No comments: Links to this post We'd like all of our young pirates to join us for our International Talk Like a Pirate Day celebration this Friday (9/17) from 3-4:30PM.

We'll have pirate stories, pirate cake and pirate prizes!  Also, there'll be a pirate parrot and pirate dogs in attendance! Our staff of friendly pirate librarians will be on-hand to answer pirate questions, help you check out pirate books, and to teach you how to be a proper pirate!

Costumes are welcome, with prizes given for the best in several categories.  So be sure to dress yourself up in your best pirate finery, and your grownup too! Or come in a clever and cunning pirate disguise--come as yourself!

Want to do some homework before Friday? Check out our kids collection of pirate books!

You can also use this handy quiz to find out your Pirate Name!

We hope to see you Friday!
Posted by CARL Staff at 1:33 PM No comments: Links to this post

Sounds like a mash-up of two things that couldn't ever go together. But Qais Sedki, a former IT consultant turned comic creator thinks it's a great way to tell stories in a way that is cool and relevant to today's youth that highlight Arab culture and reinforce Classical Arabic at a time when the language is looked down upon by today's youth. His manga, The Gold Ring is written by Sedki and drawn by Akira Himekawa, a Japanese artist. It attempts to use strengths from both cultures to have a positive impact on Arab youth. Besides just strengthening students' Classical Arabic reading skills, the book has the added benefit of being marketable and understandable throughout the Arab world because of it is a common language among the diversity of communication among Arabs. 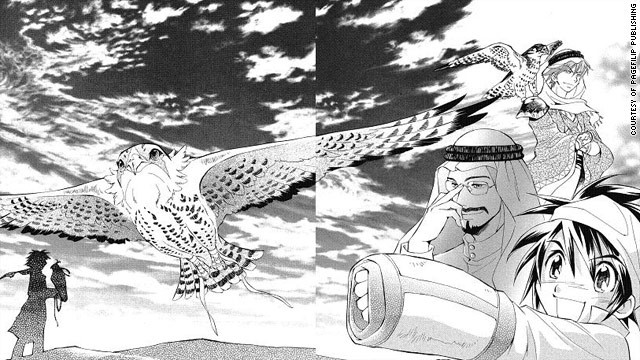 Check out the CNN article HERE.


Also mentioned in the article is "The 99," billed as the first superheroes based on Islamic culture. Their website can be found HERE.
Posted by CARL Staff at 6:50 AM No comments: Links to this post

According to the National Association for Suicide Prevention:

The World Health Organization (WHO) estimates that about one million people die by suicide every year; this represents a "global" mortality rate of 16 per 100,000, or one death every 40 seconds. Suicide rates in many developing countries have been steadily rising in recent years.

Posted by CARL Staff at 10:47 AM No comments: Links to this post

Worried about having bacon after all the world's pigs have been rendered inedible by the radiation and/or a bio-episode that brings about the zombie apocalypse? Worry no more! Think Geek has the product for you! It's called Tactical Bacon--fully cooked, REAL bacon that is canned and good for ten or more years--just enough time to wait out the zombie herds moving across the Great Plains, and for the radiation to die down!

The season is summer, not sure the month. We've been holed up in TG HQ for seven years now. The zombies have fought long and hard, but the tide is seeming to finally turn. We will survive this invasion, this walking pestilence. We will, because we were smart enough to stock up on Tac Bac - Tactical Canned Bacon. Yes, we have been surviving on bacon. That is why we are strong; that is why we'll win.

Not worried about the Zombie Apocalypse? That's OK, there need to be those that are unprepared so that they're taken first, this way the rest of us can escape! In the mean time, Think Geek has a lot of other fun bacon products for you to enjoy, or try other fine bacon products from around the Internet!

Worried about the Zombie Apocalypse? Good! You should be! Join the Zombie Preparedness Initiative, catch up on your Zombie Studies reading, and generally prepare yourself for the inevitable end!

While you're at it, check out CARL's fine zombie reading materials!
Posted by CARL Staff at 6:42 AM 2 comments: Links to this post

In preparation of our 6th Annual Talk Like a Pirate Day, everyone at the CARL wants to help you learn your pirate terms! Come on out, Friday, September 17th from 3-4:30 PM for grub (cake), booty (treasure) and PIRATE STORIES! we will have pirate dogs from Human Animal Bond, and Petie the parrot also in attendance! For additional info, call 758-3053 ARRRGH! 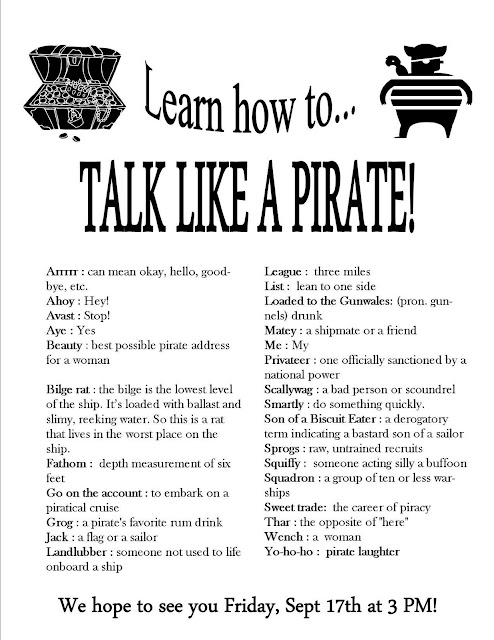 Posted by CARL Staff at 12:08 PM No comments: Links to this post 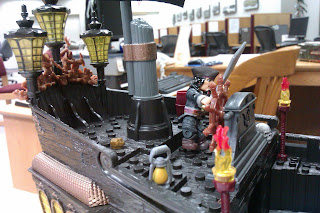 Every day we're inching closer to our favorite holiday, here at the CARL! Not New Years, not Halloween... it's INTERNATIONAL TALK LIKE A PIRATE DAY!

You may have noticed us raising our pirate flags these last few days, and the sudden appearance of pirates and pirate-themed books in our lobby's display case. It's a holiday we take very seriously at the CARL. We hope you'll join us in celebrating on Friday, September 17th for our sixth annual celebration!

On Friday, September 17th, from 3:00-4:30 p.m. we'll be having stories, grub (cake) and booty (treasure)!  Pirates of all ages are invited to participate in a pirate costume contest. And check back here to learn how to talk like a pirate! Join us, pirate dogs from the Human Animal Bond Program, and Petie the parrot.

Posted by CARL Staff at 6:33 AM No comments: Links to this post

This will possibly affect carl.army.mil, our access to databases, and other important resources. Please plan accordingly.

Posted by CARL Staff at 2:37 PM No comments: Links to this post